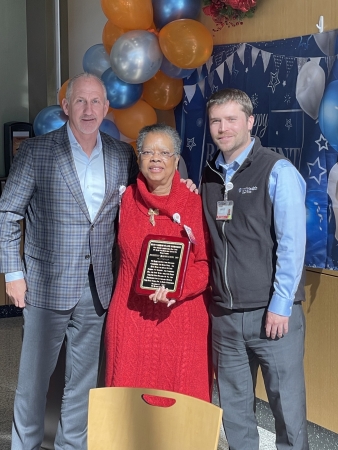 Quitman, Texas — After more than 40 years practicing medicine in Quitman, Dr. Beverly Waddleton will start the new year in a new way — retired.

“It has been a very rewarding 40 years,” she said. “I look back now and some of the things I did seem almost surreal now.”

Waddleton said the desire to become a physician struck her the summer after she graduated high school.

“I think it was just kind of a spiritual calling. I grew up with my family trying to help other people,” she said.  “It just felt like what I was supposed to do.”

She credits her high school 4-H county agent with helping guide her to Iowa State University in Ames, Iowa, where she received a full scholarship. She then attended Texas College of Osteopathic Medicine in Fort Worth and returned home to Quitman, where she started in private practice.

“Me being the first female, the first black female (physician), people were probably a little bit skittish at first because I was something different,” Waddleton said. But she built lasting relationships with her patients, many of whom are supportive of her decision to retire, but sad to see her go.

“There have been tears, congratulations, ‘We’re happy for you’ and ‘We’ll miss you,’” she said of her patients’ reactions. “Most of it is sadness, but also happiness for me.

“The thing that I enjoyed most about my practice is the relationships with patients and their families,” she added. “That will be what I miss most.”

Waddleton left private practice in 2005 and joined ETMC, now UT Health East Texas Physicians in Quitman, which she said allowed her to focus less on the business side of things and dedicate more of herself to her patients.

She was instrumental in helping get the new hospital built and she has served twice as chief of staff. Waddleton is aware of the magnitude of this accomplishment given her earliest memory of the hospital — attending the grand opening of the original building with her parents when she was a young girl. “We were told by one of the trustees of the hospital board that colored people couldn’t come at that time, we’d have to come an hour or two later,” she said.

Waddleton said she would advise those considering a career in healthcare to make sure they know why they are getting into medicine. “I think some people go into it for money or prestige, but it is not as rewarding as going into it to be a servant,” she said.

Rhonda Keller, practice administrator for UT Health East Texas Physicians in Quitman, said Waddleton’s servant leadership is apparent in all that she has done for patients, the hospital and the community.

“She’s very dedicated to patients and to what’s right. Safety of the patients is huge to her and what’s right for them,” Keller said. “She’s an advocate for them 100 percent and for this local medical team here. She’s not just a physician here, she’s a leader.”