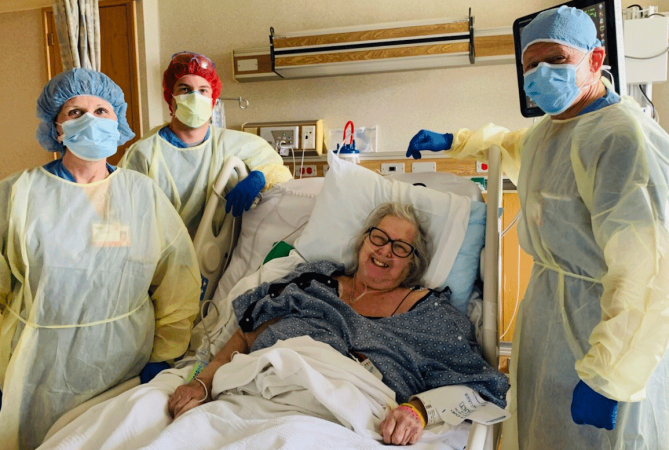 Roy Anderson and Vivian Schumer arrived at UT Health Tyler within 24 hours of one another, both gravely ill from COVID-19. They both spent weeks on a ventilator and were celebrated with viral videos of hospital staff cheering as they “graduated” from ICU and were wheeled to a different unit. On Friday, both were discharged from the hospital where they spent almost a month.

While both Schumer, 80, and Anderson, 58, will be heading to facilities for rehabilitation after their prolonged hospital stays, their recovery is nothing short of remarkable. They give credit to the dedicated team of doctors and nurses caring for them during their stay.

“They were just so wonderful,” Schumer said of her nurses. “I can’t sing their praises enough because they are just out of this world. I can’t believe they were so good.”

Schumer’s illness began at the end of March with extreme lethargy, to the point where she couldn’t get out of bed. Her daughter, who lives in Frisco, had a friend go and check on her when she was unable to reach her mom by phone.

“He had to break into the house and found me laying in the bed,” Schumer said. “He was like sent from heaven, because if it wasn’t for him I probably wouldn’t have gotten to the hospital at all.”

Schumer was intubated upon arriving at the hospital and was taken to the COVID-19 unit, where critical care nurses kept in touch with her family with frequent updates on her condition. When she was well enough, nurses set up FaceTime interviews with Schumer’s children, so they could see and talk to their mom since visitors are restricted because of COVID-19.

Critical care nurses Dionne Martin and Jacqueline Kincade even scheduled a FaceTime call with Schumer’s daughter on Passover, during which nurses helped Schumer participate in traditions and readings.

“They were phenomenal and they still are absolutely phenomenal,” Schumer said. “They’re so kind and gentle. It’s just unbelievable that nurses could be so caring.”

Schumer said she plans to keep in touch with the two after she leaves the hospital.

“They are absolutely the sweetest girls you could ever imagine,” she said. “It is so absolutely endearing. It makes me want to cry because they are so sweet. They’re wonderful nurses.”

Anderson’s stay at the hospital began the day before Schumer arrived. He was the first COVID-positive admitted to the hospital. 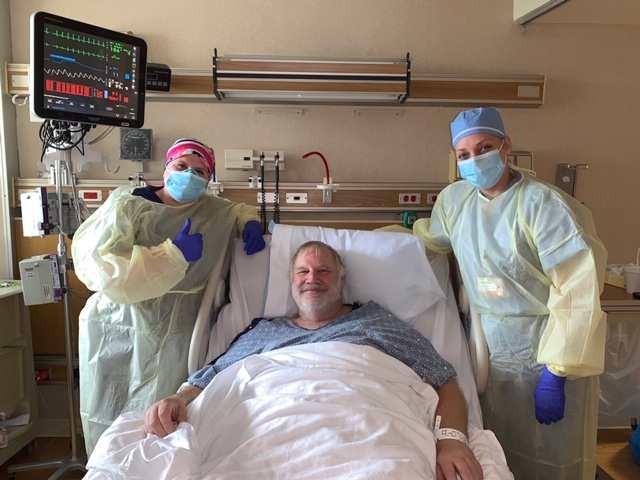 He had been to New Orleans on business and started feeling badly after he got back. He went to see his doctor in Pittsburg, and when flu and strep tests came back negative, he was tested for COVID-19 and sent home to self-isolate while awaiting the result. Within a few days he was having difficulty breathing, so he went to the ER at UT Health Pittsburg and later was transferred to Tyler.

“Two to three weeks later, through excellent care, I’m alive and well,” Anderson said. “It was actually, I hate to say it, pretty easy. All I had to do was go to sleep for about three weeks,” he joked.

“I was feeding him and asked him if he was done and he said to me, ‘There is always more room for Blue Bell.’” I cracked up laughing and said, ‘Yes there is!’” Page said. “That is one of the first sentences he was able to form and I will always remember that. It was then that I realized he is going to be OK.”

For the nurses on the frontlines, these victories are the best part of the job.

“There is no greater blessing for a nurse than to be part of a patient’s care from Day 1, participating in their healing process and rejoicing with them in the victories along the way,” Martin said. “Watching a patient go from surviving to thriving is the best blessing of all.” 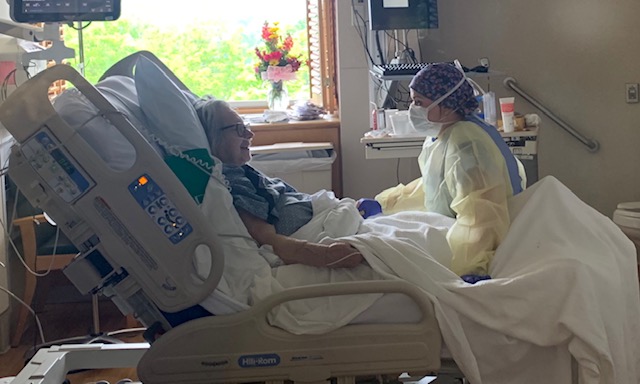