The Hope of a Survivor 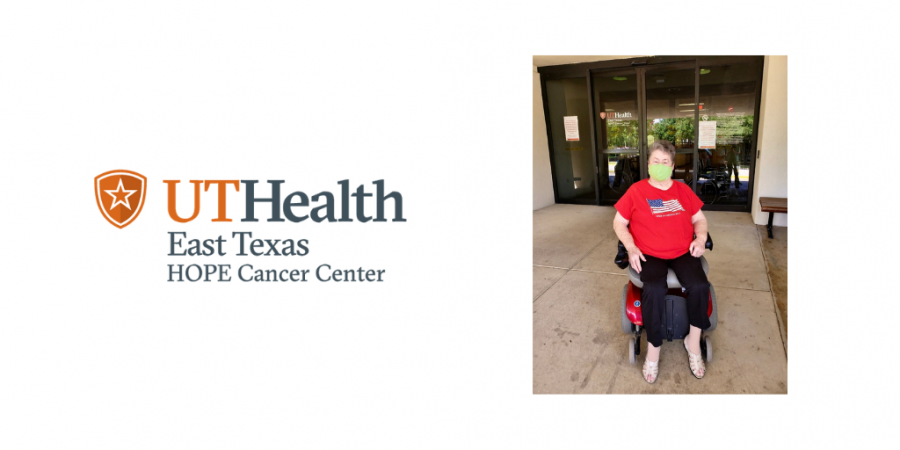 All survivors have one thing in common: hope. Without hope, you’ve given up the fight. Liana Fleming is the perfect portrait of a survivor. Fleming survived polio, a heart attack and multiple broken bones before being diagnosed with breast cancer.

“Cancer is a scary thing,” said Liana Fleming. “Once you have it, you kind of sit and wonder, ‘Could it happen again?’ And it could. But then you have to have the faith and strength to keep on living and know that everything will be okay. The UT Health East Texas HOPE Cancer Center is hope. They give you the hope and belief that with the proper care and doing everything you can to get rid of this illness, you will be successful.”

In December 2017, Fleming visited the UT Health East Texas HOPE Breast Care Center for her annual mammogram. Later that month, she received a letter saying she needed to come back for additional screenings, so she went back in for a mammogram, sonogram and biopsy. A few days later she was told she had a malignant mass on her left breast. Fleming had survived health concerns before; now she had to conquer cancer.

On Jan. 24, 2018, she had a lumpectomy to remove the tumor. A few weeks later at her follow-up visit, her surgeon, Dr. David Young, board-certified general surgeon with East Texas Vascular Associates, noticed a small concerning spot. On Feb. 8, she had a second surgery to remove it.

“It was small, but cancer nonetheless,” said Fleming. “I’m very fortunate because by having the yearly mammogram, my cancer was found early and I was given the chance to have the surgery, and have been cancer-free ever since.”

After her surgery, Fleming followed up with four weeks of radiation.

“When they tell you you’re going to get radiation treatments, you have all these horrible pictures in your mind,” Fleming said. “But I went into the center and the technicians were superb. They put me at ease. At first, it was scary, but after a couple of days, I wasn’t scared anymore. Because of the great work these people did, my comfort level was much better than I thought it would be. I did not have to worry that I was going to die from radiation or anything like that. They were terrific. The whole group at the HOPE center should be commended regularly by the patients.”

“I dearly love him,” Fleming said. “He’s a joy. My husband goes with me to my visits, and we just think he’s one of the greatest.”

Since her surgery, Fleming’s scans have shown no sign of the cancer returning.

“I was very grateful when I was able to walk out of there after my radiation, feeling that I was well on my way to recovery, even though I knew it was a few years before they could say I’m free or clear of threat,” Fleming said.

Because of her experience, the UT Health East Texas HOPE Cancer Center is more than just a clinic or treatment center to Fleming.

“The HOPE center is hope,” Fleming said. “It’s the hope, the belief and the trust that in the days ahead, not only myself, but others will be given the strength and courage to face this monster. I cannot tell you in words how much these people have meant to me. They give you the want to keep on giving it your all. I think a lot of times in cases of serious health problems, like cancer, if you don’t have something that you can hold onto, healing isn’t important. These people instill in you that even though it’s a serious thing, if you take care of yourself, get your rest, eat properly and keep it only in the back of your mind instead of worrying about it 24/7, you will succeed and regain your health again, and that’s what they did for me.”

The thought of cancer is scary, but Fleming tries to stay positive about it.

“Once you’ve had cancer or the word gets thrown at you, it tends to make you a little more thoughtful in relation to it,” Fleming said. “I don’t like to talk about it as something that is the end. I gained that from just being at the HOPE center.”

Fleming never looked at her diagnosis as a reason to lose hope.

“You can either feel like you’re going to get better or you’re going to die,” Fleming said. “I never felt like I was going to die. To be honest, I never even came home and cried because I had cancer. I was just grateful and believed that with the treatments and people there to support me, I would succeed.”

Now, Fleming has a reason to celebrate.

“Now after three years, I can sing about it and be very grateful because of it, and it’s because of these people at the HOPE center, all of them, from the doctors to the nurses to the receptionists,” Fleming said. “I haven’t found anyone there who doesn’t show their patients or anyone who walks in that this is the right place to be and that this is the beginning of the end of an illness, hopefully and prayerfully.”

Fleming recommends all women over 40 get their yearly mammograms.

“I don’t care how old you are,” Fleming said. “When you reach an age where mammograms are a good idea, I definitely believe in them.”

One in eight women will die of breast cancer. Early detection is key. To schedule your mammogram, call 903-531-8890 and press 3 or visit UTHealthEastTexas.com/services/breast-care for more information. For more information about the UT Health East Texas HOPE Cancer Center, visit HopeCancerTexas.com.

This story was featured in the October/November 2020 issue of TylerToday Magazine. You can view the story here.