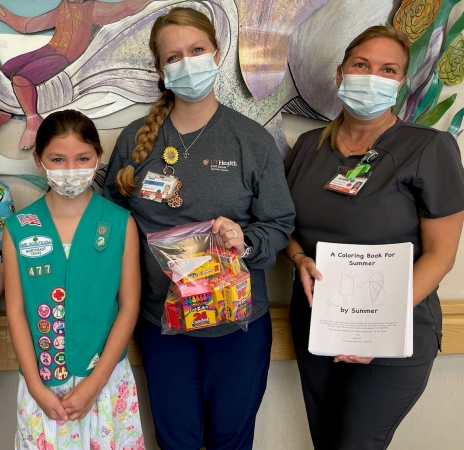 Summer Patterson remembers all too well being a patient in the hospital, bored with nothing to do while she recovered from four eye surgeries before her 10th birthday.

The Whitehouse ISD sixth grader didn’t want other kids to face the same situation, so she used her Girl Scout service project to devise a solution. For her Bronze Award project, Summer created coloring books that she distributed to local hospitals, including UT Health Tyler, along with a set of crayons for each book.

“It was her idea, and she did all the work herself,” said Girl Scout Troop 6704 Leader Emily Barker. “I think she did a great job.”

Barker said Summer was the first girl in the troop to earn the Bronze Award, which requires a minimum of 10 service hours.

“We watched her come up with the idea and go through the planning, coming up with the design and putting it into the digital format. It was just a great way for her to show off her interests, which are art and helping other people,” Barker said. “She has a big heart for helping other children. She’s really great with other kids.”

Summer, 12, said she was hoping to provide a fun activity to distract kids from the fact that they’re in the hospital, something she remembers from her eye surgeries when she was 5, 7 and 9 years old.

Summer’s grandmother, Dee Alford, said Summer has blossomed being a part of the Girl Scouts the past two years, and she is so proud of her granddaughter’s accomplishment in getting the Bronze Award.

“Summer is very sensitive. She has empathy, and she is quite willing and really steps up to help other people,” Alford said. “That’s a beautiful trait in her that’s just such a blessing.”

Robin Davis, UT Health Tyler’s clinical manager for pediatrics, said the coloring books have been well received by children during their hospital stays.

“It gives them something fun to do and provides a creative outlet to help take their mind off the fact that they’re in the hospital,” Davis said. “And when they find out that the coloring books were made by another kid, someone who spent time in the hospital just like them, they almost don’t even believe it. We’re just so thankful for Summer and her generosity.”