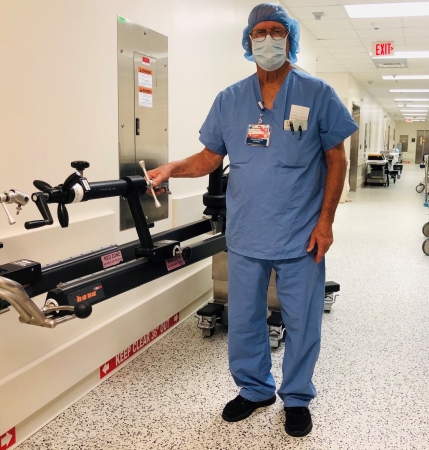 After 50 years doing a job he loves in nursing, the advice Charles Beene would give up-and-coming nurses is simple: “Make sure if you want go into nursing it’s what you want to do. You’ve got to like what you’re doing and if you don’t, then find something else.”

Beene recently celebrated his milestone anniversary, along with his 77th birthday, with coworkers at UT Health Tyler, the hospital where he’s worked for the majority of his career, save for a four-year stint at the Henderson hospital in the early 1980s.

Since 1985 he has served the Tyler hospital as orthopedic coordinator, making sure rooms are prepared and have the proper materials and equipment for surgery.

“It’s a good job, I haven’t had any complaints about anything,” Beene said reflecting on his time at the hospital.

Beene knew he wanted to go into medicine after serving two years in the Army (1966-1968) as an operating room technician. From there he went to nursing school at Texas Eastern School of Nursing, where he and another student were the first male graduates, he said. After his 1971 graduation, he started at the Tyler hospital (then ETMC), which he has seen go through countless transformations.

He’s watched not only the physical expansion of the hospital over the years, but has been witness to other changes as well, the biggest of which he says have been in terms of equipment.

“When I first started everything, was done by hand,” Beene said.  “Now we’ve got the robot and we’re doing total knee and total hip replacements.”

Beene said one of the most rewarding parts of his job is being looked up to by his peers for the knowledge he’s gained over the years, something to which his coworkers attest.

“From my first day, Charlie was an amazing resource,” said Jessica Bunton, main operating room charge nurse, who said she has worked with Beene her entire career. “Everyone in the OR loves Charlie. He is always the first to lend a hand to anyone who needs it, and I rely on him greatly throughout the day. He truly cares for all of our staff and his knowledge base will never be topped.”

“Charlie Beene takes pride in his job, and he goes above and beyond to make sure the orthopedic surgeons have what they need,” Garcia said. “He is self-motivated and requires no supervision. You can always count on Charlie, we sure have for 50 years.”