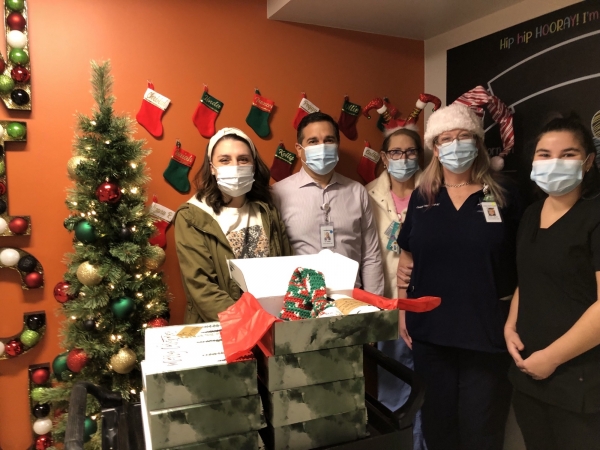 Having a newborn in the neonatal intensive care unit can be stressful any time of year, but having a baby in the NICU during the holidays can be even more trying for a family. A Tyler woman and her nonprofit organization is hoping to ease the burden by delivering care packages to the UT Health Tyler NICU.

Lexi Sullivan on Monday delivered the care packages on behalf of Eve’s Victory, an organization with the mission of bringing hope to families struggling with premature birth, miscarriage, stillbirth, having a disabled and/or ill baby or the loss of a child.

“It’s isolating, not only being in the hospital, but not being able to bring your baby home,” Sullivan said. “This shows there are people who know what you’re experiencing and that you’re not alone.”

Sullivan got involved with the nascent organization after her own pregnancy loss six years ago when someone saw her story on social media and reached out to her.

“All of the women in Eve’s Victory have experienced either NICU stays, miscarriage or stillbirth. We all had a passion for reaching out to people who are going through something so dark and scary and something that isn’t really talked about,” she said.

The cofounders initially reached out to friends in different states asking if they would want to take care packages to NICUs and hospitals. From there God started opening doors for the group to launch in four different states, organizers said. Sullivan and her family moved to Tyler this summer and she has been working to build a support network for East Texas.

“I felt such a calling for me to be bringing this to Tyler,” Sullivan said. “I really felt there was a need for people to know they’re not alone and there are people who understand what they’re going through and how dark it can be.”

Sullivan, now a mother of two boys, ages 4 and 8 months, hopes to grow the organization locally. Information about the group, including how to join or donate, can be found at www.evesvictory.com or through their Facebook page.

“Eve’s Victory has really been a good prayer group for me. I’d like to reach out to other people the way they were there for me because I know how badly I needed it,” she said.

UT Health Tyler NICU Director Marcie Tunstall said she was grateful for the care packages because they will provide comfort to families at the holidays.

“This heartfelt gift is extremely meaningful,” Tunstall said. “The gratitude extends beyond our NICU team to the parents who receive them and are comforted by the kindness of others.”

Dr. Armando Castillo, medical director for the NICU, said most parents are expecting to leave with their babies soon after delivery and are not prepared for a NICU stay, which can be a traumatic experience. The care packages, especially the journals, are a great way to bring comfort, he said.

“It’s a way to get them involved and for them to have ownership through the process,” he said. “They can write the things that happen on a day-to-day basis so it’s something they can share with the baby as they grow up.”