A Surprise Diabetes Diagnosis Leads to a Healthier Life 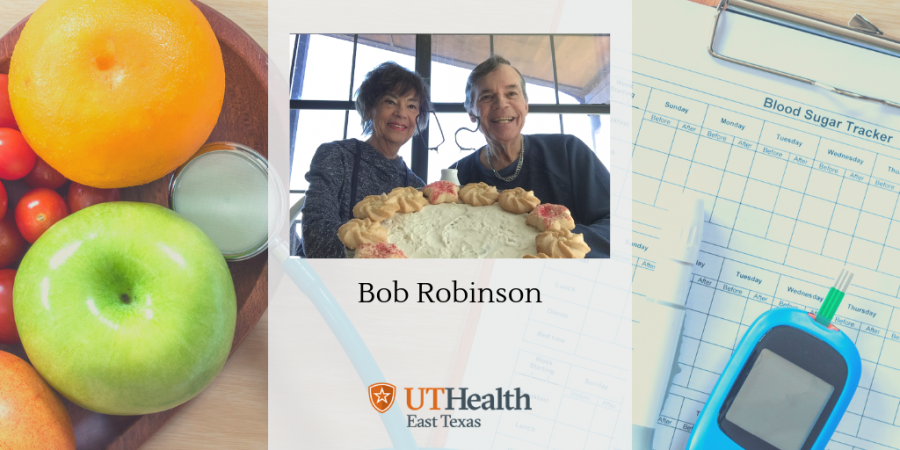 Bob Robinson and his wife, Sherry, moved backed to East Texas and now enjoy spending time at their lake house and with their 6-year-old grandson. However, in 2010, Bob started to feel extremely fatigued and overall less-than stellar, which led him to speak to his primary care physician. The results came back, giving him a life-changing diagnosis.

Bob was diagnosed with Type 2 diabetes. Diabetes is a lifelong disease that affects the way your body handles glucose, a kind of sugar, in your blood. People with type 2 diabetes make insulin, but their cells don't use it as well as they should.

Even though he hadn’t been feeling great, the diagnosis still took Bob by surprise. “I knew something was wrong,” says Bob. “And I told my wife I thought I had diabetes, and she said, ‘Don’t be silly.’ It was a complete surprise when the doctor confirmed I had diabetes.”

After being diagnosed, Bob read up on his disease. He studied diligently and learned how to keep his health balanced. However, learning how to control his health and putting it into practice turned out to be two different things. Bob found ta physician at UT Health North Campus Tyler who was able to help get his diabetes under control.

Bob's physician worked with him throughout the years, evolving his treatment plan. He went from taking oral diabetes medications to injecting insulin, which he says “worked like a charm.” This type of adapting and personalized focus is what Bob loves about Dr. Bratcher. “Dr. Bratcher is very receptive to input. It's a give and take,” says Bob. “And I really enjoy that road.”

Even with his physician's guidance, it wasn’t until the past year and a half that Bob made significant changes to his lifestyle. “The path that I had initially taken, especially when I first went on insulin, was, ‘Well I can eat what I want if I cover it with enough insulin,’” says Bob. “By the time I decided to diet, which was at my wife's urging, I was taking about 95 units of insulin a day.” This heavy reliance on insulin changed when his diet did. Bob cut out things like desserts, pasta, bread, chips and fried food. He said his wife’s excellent cooking has made his change as easy as it could possibly be.

Bob lost 80 pounds and now takes only about 10 units of insulin per day.

In January, Bob and Sherry celebrated their 50th wedding anniversary, which he got to celebrate knowing he has made his life even healthier than it was before being diagnosed. “It's like what my doctor told me,” Bob remembers. “He said ‘In all likelihood you're going to be in a lot better health than you would have been had you not had diabetes.’” I quit drinking socially. I had smoked until 2010 and I just quit. It just changed everything. I think I'm in better health than I would have been.”

Bob continues to read up on diabetes information and check in with his UT Health physician. “Wouldn't think of anything else,” Bob says of UT Health. “It's the greatest. I wouldn't think of going anywhere else. And I say that to my friends and family. I don't have anything to say about it that's not good. They are really superb.”