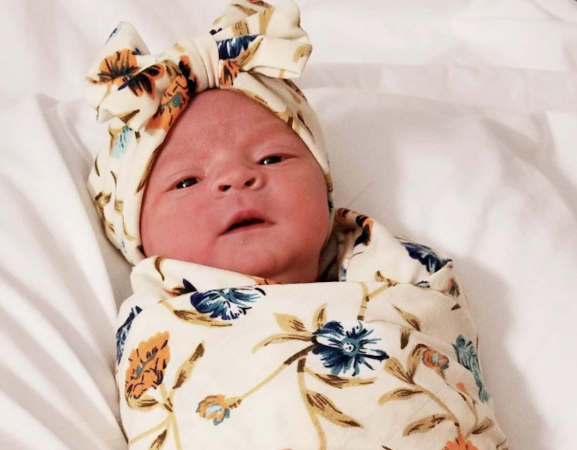 Chelsea Dillard was planning to have her daughter, Devinity, at UT Health Jacksonville just like she’d had Devinity’s older brother three years earlier, in one of the hospital’s comfortable labor and delivery rooms.

Devinity had other plans, deciding to make her entrance into the world earlier than expected – in the back of an ambulance just a few short minutes from the hospital.

Dillard was taking a bath at her home in Rusk on Halloween night when her water broke. Realizing the baby was coming quicker than anticipated, she called an ambulance.

UT Health East Texas EMS arrived, loaded Dillard into the ambulance and was heading to the hospital when Dillard said she thought the baby was coming.

Charles Janak, who has been a paramedic for 10 years, said he’s had numerous pregnancy calls but this was his first delivery.

Janak said he was trying to get an IV started when Dillard said she felt like the baby was coming and she needed to push. He saw the baby’s head crowning and instructed his partner, Lane Clifton, to pull over so they could deliver the baby.

“I was too busy to be scared or nervous, you’re in the moment,” Janak said. “You go with your instincts and what you learn from school and training.”

Janak cut the umbilical cord, dried the baby off, wrapped her in a foil blanket and put her on Dillard’s chest to bond. Then he and Clifton continued the drive to Jacksonville, where they were met in the Emergency Department by labor and delivery nurses.

“Once we got to the ER and went upstairs the nurses took care of everything,” he said. “It was relief and joy at the same time.” Janak said even though he got a scare on Halloween having to deliver a baby on the side of a rainy road in the back of his ambulance, it ended up being a treat because baby and mother are both doing well.

Dillard and Devinity, who weighed in at 6.7 pounds and 19 inches long, plan to spend the next few days in one of those comfy hospital suites Dillard was expecting, with an anticipated release date later this week.

“It’s been quite the experience, it’s been great,” Dillard said. “I wouldn’t have it any other way than how it happened. There’s nothing I would change about it no matter how it happened.”