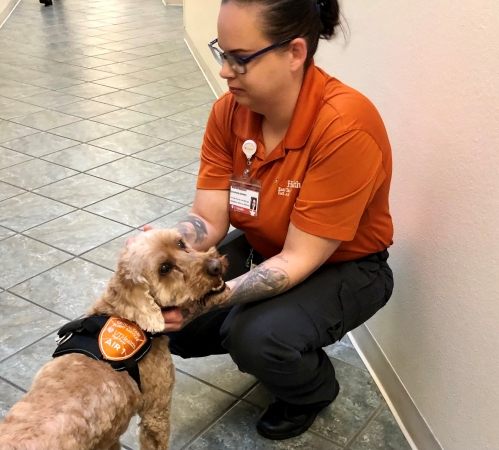 Emergency responders often face high levels of stress daily, which is why UT Health East Texas EMS/AIR 1 is trying to counter that stress with a new member among the ranks.

Apollo Wiggins, a 34-pound Labradoodle, started coming to the office with his owner, Kristi Wiggins, clinical coordinator and flight nurse for EMS and AIR1 in October as a way to help EMS employees decompress and deal with the stress they face on the job.

“The mental health of our crews and our dispatchers is extremely important to us,” said John Smith, CEO of UT Health EMS/AIR 1. “We already have a critical incident stress management team within EMS, and Apollo just brings a different type of stress reduction for our team. I have seen nothing but positive results from having him here.”

Wiggins said she got the idea to bring Apollo to the office after going to an event and seeing how Dixie, the mental health canine from Hopkins County, brought joy to the public and employees alike. Although Apollo was strictly her pet at that point, he had extensive training so she thought he could do the job.

She discussed the idea with Smith and they decided to give it a try during EMS continuing education training that required employees to undergo daylong instruction in the training theater at EMS headquarters.

“I brought him in and let him roam around the theater with the EMS employees and everyone just loved it,” Wiggins said. “Every training evaluation that was filled out had Apollo’s name on it. They said they loved having him around. That pretty much cinched his fate with EMS.”

Apollo now joins Wiggins on the days she’s in the office and not on a shift flying in helicopters. Employees have come to look forward to his presence and many now keep treats on their desk for him.

“It makes you happy and it makes you calm because he’s just so calm and always wants to love on you and just get petted,” Jazmyne Kinney, system status controller in dispatch. “It always makes you feel calm and feel better after a stressful day or a hard call.”

Wiggins, who also is in charge of peer support at EMS, said she will make a point of bringing Apollo in to meet with employees who have had a particularly rough call.

“I’ve had several people come off shift and they will come and sit in my cubicle and pet him for a while. No words need to be said. If they’ve had a hard shift, they’ll just come and pet on him and go home,” Wiggins said.

“I also make sure we go back in dispatch and spend some time there because when they’re taking those calls, it’s rough on them, too,” she added. “They may cry for a little while, and he just sits with them. He knows who needs him, who is stressed, and he’ll spend time with them.”

Wiggins said when she walks in the door at EMS, employees are disappointed if Apollo isn’t trotting in with her. “They all say it’s great to see Apollo because he puts a smile on your face no matter what kind of day you’re having.”