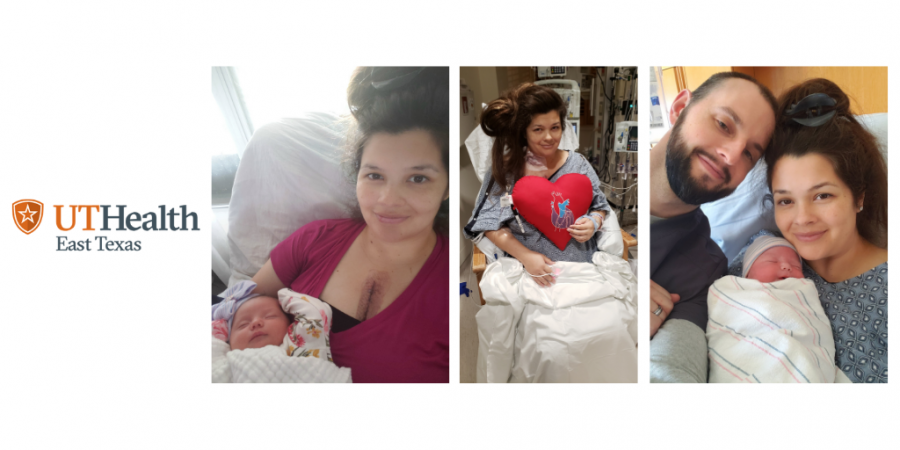 “I was sitting on the couch and my chest started to hurt,” Bell said. “I went to get my husband because it was getting worse and I wasn’t sure what it was. My husband is a family medicine physician resident at UT Health East Texas, so I figured if anyone would know what was going on, he was my best chance. By the time I got to him, the pain started to go up to my neck and down my arms. I told him what was happening, and he knew it was a bigger concern than I thought. I thought it was just indigestion or really bad heartburn, but he recommended we go to the ER.”

When they arrived at the emergency room at UT Health Tyler, the care team began running tests to identify the problem.

The next day Bell had a heart catheterization, a procedure done to examine how well the heart is functioning. It showed a blockage in two of her main arteries. This meant her heart was not getting enough blood. Because of this, she would have to undergo emergency open-heart surgery.

“She had a rare condition called spontaneous coronary artery dissection (SCAD),” Dr. Patel said. “A tear occurs in the wall of the coronary vessel, compromising blood flow to a region of the heart. It’s similar to a heart attack, but without the previous formation of a blockage. The decision of what treatment to perform was a very difficult one, requiring collaboration between our cardiology and cardiac surgery disciplines. Typically, in SCAD no treatment is required and the dissection heals. In Bell’s situation, the tear got worse, compromising blood flow to a large part of her heart. Untreated, it would likely lead to death.”

Having a heart attack within a week of having her baby was the last thing Bell expected.

“They originally thought maybe I was having a blood clot because if something goes wrong after having a baby, that’s pretty common,” Bell said. “The science kept pointing to my heart, but I’m only thirty-four and have no history of heart problems, so it was just weird to think that it was my heart. The doctors and nurses were awesome that they kept going that direction, even though it seemed so unlikely.”

Bell had double bypass surgery on October 23, 2020. She spent a week in the hospital recovering until she was discharged home. Since then, she has been participating in the Pritikin Intensive Cardiac Rehab (ICR) program three times per week at UT Health East Texas Rehabilitation Center in Tyler.

“As with most heart procedures, recuperation is progressive over several weeks and is aided by many specialists including the doctors and nurses in the hospital, as well as our excellent cardiac rehabilitation program which promotes short-term healing from surgery and long-term goals for cardiovascular health,” Dr. Patel said.

Although her condition was rare, she’ll always have to keep an eye on it. Bell is expected to make a full recovery.

“Fortunately, in Bell's case, follow-up imaging has shown her heart function to progressively improve,” Dr. Patel said. “Of course, it helps that she is young, healthy and has a wonderful attitude on life. In situations like hers, minutes count when blood flow to the heart is compromised because the sooner the problem is fixed, the more likely the heart is able to heal.”

The experience was challenging and unexpected, but the staff at UT Health Tyler did everything they could to make her more comfortable.

“There was nothing that could have prepared me for this,” Bell said. “Usually when something is coming up, I will research it to death so I can be prepared. I tell my husband all the time that I do not like being blindsided, and that’s exactly what happened here. However, the staff did a really good job explaining what was about to happen and what to expect. Even little things, like one of the nurses telling me that I would have a breathing tube in when I woke up from surgery. I had no idea what to expect but was so grateful she told me that. Had I not known, and woken up with a breathing tube in, I would have panicked. Instead, I was able to stay calm. Throughout my entire time in the hospital, there were nurses that went out of their way to help my husband and me.”

Looking back, Bell said there may have been signs of her condition during her pregnancy, but they weren’t anything uncommon for a normal pregnancy.

“I think I had some problems when I was pregnant, but they were all things that were pretty typical for a pregnancy,” Bell said. “They were different for me because I had four other babies and didn’t experience these symptoms with the others. With this one, I was really tired. I was exhausted. But again, I have four kids, so that was kind of expected. I would also get really lightheaded, which isn’t super uncommon, but I never had it before so I thought it was weird. When I laid down, I would have a hard time breathing, but again, you have something huge growing inside of you. There were a couple of times when I had chest pain, but I thought it was heartburn. I took antacids and after a while, it went away. Now I look back and wonder if maybe that was something. But there was nothing that totally pointed to something being wrong, just small things leading up to it.”

Even if there were signs of SCAD during her pregnancy, Dr. Patel told her there was nothing she could’ve done to prevent it.

“The doctor said it’s like being struck by lightning,” Bell said. “It’s so rare. No one knows where it’s going to happen or when it’s going to hit. I asked him if there was anything I could have done to prevent it or see it coming, and he said no. It’s really rare and just happens.”

Bell is thankful for the care she received from Dr. Patel.

“Dr. Patel was amazing,” Bell said. “He was so kind and just really caring. I was supposed to get discharged on October 31, but then something happened and it looked like it was going to get delayed. I was so ready to be home with my kids and very sad when the nurse came in and told me it probably wasn’t going to happen, even after we’d been waiting all day. Thankfully, Dr. Patel was able to do what needed to be done to get me out that day, and I was so grateful.”

As a mother of five, the hardest part of this experience was not having her kids with her in the hospital.

“The kids never got to be at the hospital with me,” Bell said. “Once I was better, we would video call so they could see me, but even then, it wasn’t the same. It sounds cliché and cheesy, but after having a near-death experience and being in the hospital all that time, all I wanted to do was be with my kids and new baby, but I couldn’t be. So now I’m trying harder to appreciate life, where I’m at and just enjoy it. I’ve always loved my kids of course, but it’s helped me to be more patient with them and to appreciate the small moments and really try to savor them. Fun fact, the day I had the surgery was the original due date for my baby. I had her a week early and now I’m so grateful.”

This story was featured in the February/March 2021 issue of TylerToday.