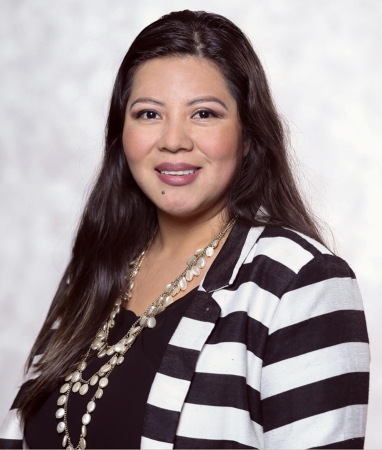 It took one person to offer Ruth Rendon a glimpse at her future, first by giving her a job and then opportunities to advance, offering support and mentorship along the way. Now Rendon is paying that forward in her position as a human resources executive assistant and certified interpreter for UT Health East Texas.

That boss and mentor gave Rendon a chance when she wasn’t sure where her path in life would lead. Rendon moved from Mexico City to Texas with her family when she was 8, struggling to learn English and sometimes bullied by others because of it. Rendon attended Angelina College, but wasn’t sure what she wanted to do in life until she started working at a staffing agency in Nacogdoches after the owner offered her a job because he needed a bilingual recruiter.

“A few months later, I was promoted to branch manager in Nacogdoches. Within that year, I was promoted to area manager to oversee four locations,” Rendon said. “Helping people as a minority, I felt like we could do so much within our community, so I became part of each chamber of commerce with each community and was active with job fairs for non-English speakers.”

Despite the sometimes grueling travel schedule that managing four branches entailed, Rendon said the job was fulfilling because she saw the difference she was making in people’s lives. To this day, she still runs into people who thank her for helping them get the jobs that they’ve stayed in for years.

“When I went to Nacogdoches a month ago, I ran into a person that thanked me. This person approached me and said, ‘If it wasn’t for you I wouldn’t have the job I have.’ To me, that’s humbling to know that I’m able to make a difference and help someone,” Rendon said.

“It was a sense that I’ve accomplished something by helping someone get ahead, get a good job,” she recalled of her time at the employment agency. “I felt like I was assisting them on their next journey, their next career path.”

Perhaps it was because she’d seen it firsthand in her own career journey as her boss provided opportunities to advance her career, often pushing her to the next step even when she didn’t think she was ready.

“The owner of the staffing agency gave me the opportunity for growth. He believed that I could do the job and gave me the training. I will always be grateful for that,” she said.

Now Rendon is using her skills to help others who might not always advocate for themselves. She helped restructure UT Health East Texas’ interpreter program that now includes more than 50 employees who are certified to interpret for patients and their families.

“I’ve been able to help when it comes to issues related to human resources and use my skillset to help where needed,” Rendon said. “I’m grateful that the hospital gives the opportunity to use your skills. When I’ve been a translator for an employee, I’ve been their voice. It has brought such joy to me to be able to help in so many ways.”

Rendon also is using her voice as a member of the UT Health East Texas Diversity, Equity and Inclusion Council, noting that the group isn’t just talking the talk, they’re walking the walk.

“Being a part of DEI has been an opportunity for our voices to be heard, to make a difference,” Rendon said.

The group’s work, she said, gets to the heart of the company’s purpose, “We care for people. Our purpose is to care for our patients, their families and each other.”

“This is a hospital system and we want to make sure we’re targeting our audience—that’s everyone,” she said. “It’s being inclusive no matter what.”