“I was severely obese and depressed,” said Brian. “At my heaviest, I weighed 388 pounds. It was hard to do anything, which made me feel terrible.”

Brian also suffered from sleep apnea, which is a potentially serious sleep disorder when one’s breathing repeatedly stops and starts through the night. In addition to snoring loudly, the person also feels tired in the morning, even after a full night’s sleep.

Feeling tired and depressed made Brian’s mood spin lower and lower every day. After a while, he knew he had to do something, so he met with Dr. Charles Keith, a board-certified bariatric surgeon at UT Health Tyler Bariatric Center, to discuss his options. Brian already knew a lot about bariatric surgery, as four members of his family had undergone gastric bypass surgery.

“I was already knowledgeable about most of the options because of what my family members had gone through. In my case, Dr. Keith recommended that I have gastric sleeve surgery, so he put me on a two-week liquid diet to lose more weight prior to surgery,” he said. 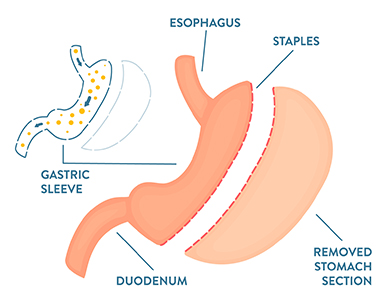 Gastric sleeve surgery involves the removal of a large portion of the patient’s stomach. It keeps the stomach at the same length but with a much slimmer width, like a shirt sleeve. No changes are made to the patient’s intestines.

Dr. Keith performed laparoscopic gastric sleeve surgery on Brian, as he does with many of his patients. Laparoscopic surgery is less invasive than traditional surgery, which leads to a shorter recovery time.

Bariatric surgery at UT Health East Texas is performed with minimally invasive techniques. That means small instruments are used through small incisions and a camera for visualization. This leads to less pain, shorter recovery, and better outcomes for our patients.

With a sleeve gastrectomy, approximately 80% of the volume of the stomach is removed. After surgery, patients eat much smaller meals and tend to have fewer cravings and hunger than they did prior to surgery. This is because most of our 'hunger hormone' is created in the portion of the stomach that was removed, so after removal of that part of the stomach, there is much less 'hunger hormone' produced.

Changes to a New Lifestyle

It is important to follow an appropriate diet in order to have excellent results, and the surgery makes it much easier for someone to do so and maintain.

He also had to learn which foods he could eat and which ones he can’t. “Basically, I can still eat almost everything, just in much smaller portions. It’s a learning process,” he said.

Thanks to Dr. Keith and his staff, Brian felt well-prepared for the surgery and afterward. “They’re a lot like family once you get into the system.” In addition, the program’s Facebook support group is a great tool for former patients to answer questions from new patients. “You can go online and read each other's stories and post your own updates,” he said.

Brian no longer feels depressed now that he weighs 192 pounds. “I feel great and I’m more energetic. I can even ride roller coasters,” which he looks forward to riding with his three children.

With his new energy and lifestyle, Brian is putting it all to work for his eight-year-old company Lawn & Pressure Washing Services. “I’m self-employed, so I produce the work while my fiancé handles the scheduling.”

With a wedding in the near future, Brian and his fiancé are looking forward to a trip together. “I’ve never been on a cruise, but my fiancé has suggested that for our vacation.”