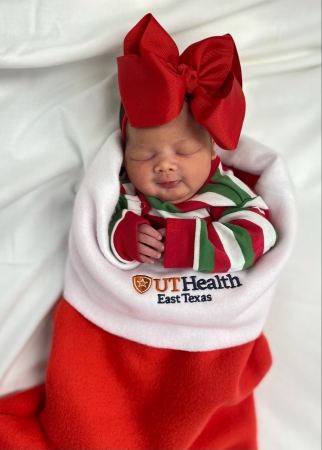 Henderson, Texas (December 13, 2021) — Surprises weren’t in short supply with the arrival of the first baby born in December at UT Health Henderson.

Mother Meagan Neal said she was shocked and thrilled when nurses brought her a hand-sewn stocking embroidered with the UT Health East Texas logo, a keepsake all newborns will go home with in the month of December.

“It was so adorable when they brought that to me,” Neal said. “I was expecting her to come after Christmas, so it was just perfect.”

Neal wasn’t expecting baby Aliyah’s arrival until at least her Dec. 27 due date, so her Dec. 7 birth was definitely a surprise. Just as surprised was longtime UT Health Henderson OB Director Janet Neal, RN, who happens to be Meagan’s mother (and now Mimi to Aliyah).

All three of Meagan’s previous children have been born at UT Health Henderson and usually arrived close to their due dates, Janet said, so when she heard her daughter was in labor Monday night, she hustled back up to the hospital where she’d been working only hours earlier.

“It was special to me because I was surrounded by the doctors and the staff that I know personally, and it was my daughter delivering,” Janet said. “It was just special to me to be able to be there and not have to be a nurse. Our nurses are awesome, so I know she was in good hands. I could just sit back and relax and be Mimi.”

Aliyah easily fit into her new Christmas stocking, which will find a place on the mantel alongside those for dad, Hurashio Morgan; sisters Nahla, 11; Demi, 10; Danika, 9; and Skylar, 7; and brothers Hurashio Jr., 5, and Drayce, 2.

“We’ll actually use it this year. She came before Christmas so she’ll get a few things in her stocking,” said Meagan, who works in the hospital’s medical records department. “I want to keep that forever so that when she gets older I can say, ‘You were so little you could fit in this and it swallowed you.’”

The oversized felt stockings were hand sewn by members of the local Church of Jesus Christ of Latter-day Saints.